“To have another language is to possess a second soul.” 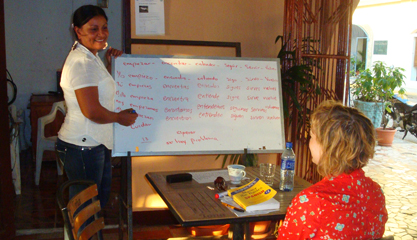 There are a lot of  affordable immersion Spanish programs in around the world. Study abroad and learn a new language.  Stay with  a host family while you learn Spanish in the morning and apply the materials you learned in class with your family and the local community. Check out our instant immersion program in Nicaragua and study Spanish on the beach.

One on One Spanish Online

Thanks to the internet you can learn Spanish from a native Spanish speaker without spending a fortune on classes or in-state private tutor. There are one on one immersion style Spanish via Skype. Students are taught in only Spanish for four hours a day five days a week.  This is one of the cheapest and easiest way to learn Spanish.  If you do not have the time for studying abroad or  regular one on one session, you can schedule a reduce course load and learn from home.

Now that you know the best way to learn Spanish, go out there and learn! Spanish is a beautiful language and it represents an entire culture across many countries. If you truly want to understand a culture and its people, learn its language. If you can’t travel to them, then learn it from the comfort of your home!

If you have any questions, inquires, or just want to know a little bit more about different Spanish course, feel free to contact us.